The following article was written by my son Ross in 1992 as part of a school project. It may be of general interest to those who are embarking on an embryo program for the first time. Please note that due to constant improvements and research some of the drugs and techniques may now be outdated.

The History of Embryo Transfer.

The first successful Embryo Transfer took place in England in the 1890's by a fellow named Walter Heap, his subjects were rabbits. Although that was a success, Embryo Transfer has not been applied commercially until the arrival of the hormone FSH, which stands for Follicle Stimulating Hormone, which occurred in the 1950's. At first the only technique was surgical to both flush and implant the embryos. While these methods were successful they were very expensive, required a large setup, and a lot of experience.

What is Embryo Transfer?

Embryo Transfer is basically, multiple injections of hormone to stimulate and multiply the ovulations in the cow that you want to get the embryos from.

Benefits of Embryo Transfer for farmers.

Basically it multiplies the offspring of the farmers best animals. Farmers can use their best bulls over their best cow or heifer and get a good calf whereas now the farmer can run an embryo program and possibly get a life times' production with one flush.

There are three hormones that I know of and they are FSH, Follicle Stimulating Hormone, PG, Prostaglandin, and PMSG, Pregnant Mare Serum Gonadotropin. The FSH is taken from a cow's Pituitaries, which is a gland in the brain that produces growth hormones and sex hormones. The PMSG is taken from a cows Serum, which is from the blood. PMSG and FSH cause the cow to super ovulate and the PG causes the cow to cycle.

First choose a donor cow for flushing, then insert a CIDR, which stands for Controlled Intra-vaginal Drug Release. The CIDR stops the cow from cycling by producing a hormone that makes the cow think that it is pregnant. Give the cow a series of injections morning and night with a drug such as Embryo S, which is a Follicle Stimulating Hormone that starts off at between 3.2 ml - 4.0 ml and works down each day to 0.8 ml. On the third day of injections also inject some Prostaglandin. Prostaglandin is a hormone causing the cow to cycle (come into season). After all the injections have been done and the CIDR has been pulled, watch the cow to find out the time when it comes on heat. Ten (10) hours after the cow has been on heat inseminate the donor cow with two straws of semen, then 12-18 hours later a second insemination using one straw of semen, then another 12 hours later a third insemination and finally 12 hours after that another insemination if you wish. Seven days later the donor cow is flushed and the embryos are isolated and then inserted in to the cows or frozen.

After the preparations before the flush the cow is placed in a head bail then the cow is cleaned out, by getting all the poo out of the way then an instrument called an introducer is put into the cow's vagina and the vet puts his hand up the cow's bottom to help guide the introducer. It is pushed gently through the cervix into the uterus. The center piece is pulled out and a tube called a catheter is put in through the shell of the introducer and pushed right up into the uterine horn then a small balloon called a cuff at the end of the catheter is blown up. After the cuff has been blown up, a fluid for lubrication and nutrition of the embryos has to be injected. The fluid is a sodium chloride based phosphate that has a small amount of serum. The serum is an amber coloured liquid that separates from the clot when the blood hardens which is what we know as a scab. 210 - 300 mls of this fluid is injected through the tube and into the cows uterine horn, it is then sent back through the center tubing of the catheter in to an embryo filter. The extra fluid is released while the embryos are kept in the filter by a small grid on the bottom. After one side of the uterus has been flushed then the other side is flushed. When the flush is complete the embryo filter is washed out into a small container. The vets then search for embryos looking through a microscope. The embryos are graded and put into straws and implanted into the recipient cow or frozen for later use.

The difference between surgical and non - surgical transfers.

Besides the fact of trauma on the recipient the surgical transfer places the embryo further up the uterine horn than non - surgical. There may be a small increase in the conception rate maybe 5%, however if the recipients are in good shape it will not be of much benefit. Surgical transfer requires a small cut in the cows flank on the side of the ovulation. The uterus is pulled out and a small hole is made to the uterus. A small catheter is placed in through the hole and the embryo released. Non surgical is the same as A.I. A special gun is place up through the cow's vagina and pushed through the cervix. The embryo is placed in the side of the ovulation and released from the gun.

With embryo transfer an already fertilised egg is being inserted, which eliminates one of the steps of artificial insemination so the conception rate should be 5 - 10% higher than artificial insemination, but a lot depends on the condition of the recipients. On an A.I. program the conception rate is 60 - 65% while on an embryo transfer program it is expected roughly the same sometimes a bit higher.

Temperatures that embryos can be stored in.

Fresh embryos can be stored at 37ºC for 6 - 8 hours without much harm but it is recommended that the embryos are inserted into the recipient cow or frozen as soon as possible. The embryos are frozen in liquid nitrogen, they can be stored in this for ever.

The costs of an embryo transfer program is fairly expensive Here are some average prices: (April 1992)

Cost of providing good quality recipients should not be over looked. This averages out to around $300 - $500 per recipient.

Australia is quite advanced in embryo transfer, equal to the world. At this point in time scientists are taking embryos and breaking them up into individual cells and making identical animals, this method is called cloning. The cloning aspect is not commercially available yet but should be soon. It really depends on the imagination of the people that are involved with the research. This may lead to farmers taking embryos out of the tank, seven days after examining their own recipients and then transferring the embryo. 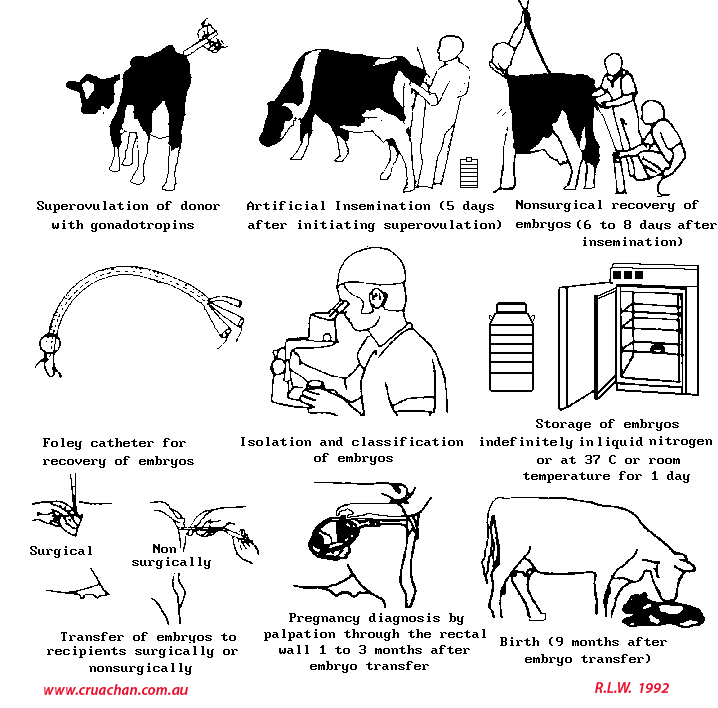 Any cow that is mature and cycling is able to be put through an embryo transfer program. The only problem that could stop the cow or heifer from being flushed is abnormalities of the reproductive tract or with secondary abnormalities due to disease or injury. Some heifers as young as eight (8) months have been successful in flushing embryos as have cows eighteen (18) years old. Although it is possible for embryos to be flushed from a cow or heifer at these ages the results obtained from the heifer or cow may not be worth the effort.

A major problem that has to be faced is that the response of an individual cow cannot be predicted. The response of a donor cow can vary from 0 - 30 or more eggs, but the average being around 4 - 6 depending on the breed, age and maturity. Nutrition is a very important factor, and donors should be on a rising plain of nutrition in the month leading up to the flush. If the donor isn't in good condition then it will not produce as many eggs to be fertilised. Also there is the response to the drugs, sometimes the cow will over respond to the drugs and sometimes under respond. Future programs would have the drug rates altered to suit the response.

Collecting the embryos is only half the job. Then the embryos must be transferred into cow or frozen for later usage. On average about 60% of the embryos transferred result in pregnancies. Sometimes it can be as high as 80% and as low as 20%.

A recipient is best to be a bit larger than the embryo calves mother so that it will not have any trouble having the calf. Not all cows are able to be a recipient cow, before the cow or heifer can become a recipient it must be palpated. This is done by the vet putting his hand up the cow's bottom and feeling around to see if everything is in working order. This is done because some cows have a twisted cervix or have had calving problems so it is best to avoid using these cows or heifers for recipients. Just before the flush the vet has to check the recipient cow or heifer to find out which side the cow has ovulated on so the embryo can be inserted on that side. The recipient cow should be in good condition for there to be a good conception rate.

Embryo Transfer as a Management Tool.

Embryo Transfer is now accepted as the quickest and most cost efficient method of increasing the rate of genetic improvement within a herd. For beef and dairy operations, it can be a valuable addition to any breeding program, leading to greater efficiency and profitability.

The top cattle in any herd are rarely available for purchase, however the owners are often willing to sell embryos. The importation of new blood stock can be achieved safely and economically through the purchase of embryos from anywhere in the world, once the quarantine regulations have been fulfilled.

Embryo programs are also done on deer, goats, horses, dogs, cats and almost every other living animal. At the moment a group of scientists are working on embryo transfer in mice and it is going well.

This project would not have been possible without the help of the following people: