The highest peak in the view from our farm is Ben Cruachan, and hence the name of our cattle enterprise

The farm is located in southeast Australia about 250 kilometres east of Melbourne in the foothills at the tail end of the Great Dividing Range in an area known as Gippsland, Victoria. The closest town is Maffra with a population of around 4000 people. This part of Gippsland was opened up by Angus McMillan, a Scottish explorer, who traversed the mountains from New South Wales in 1840 ... so the cattle fit in pretty well.

The Scottish influence is noted with names like MacAlister River and Lake Glenmaggie. To the northwest of the property lies Ben Cruachan, named in 1847 by Malcolm MacFarlane, another Scot, after a mountain of the same name in Argyll, Scotland ... hence the name of our fold. Cruachan in Gaelic means "rounded or conical hill" and is pronounced "crew - ach - an" or "crew - ack - an" depending on your ability to pronounce the guttural "ch".

This area is in a "rain shadow" and has only around 575mm (23") rainfall annually.  Long term rainfall figures tend to show a relatively even distribution of rain throughout the year with rains in spring being most reliable.

Due to the lack of natural rainfall, there is a large irrigation scheme which supplies a lot of the commercial farms in the area.

Our farm is just off the flatlands and into the foothills and it does not have access to the commercial irrigation scheme.  However, irrigation has been added to 65 acres of the farm using lateral sprays and K-line pods which are supplied from a bore we had drilled on the property.

Our bore is 160 metres deep with a submersible pump driven by a 30kW three phase motor. 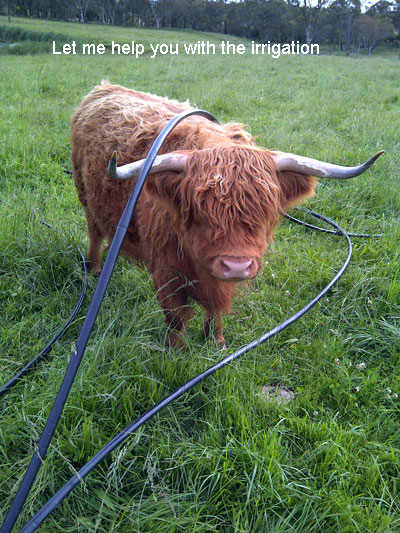 What a difference water makes!! Prior to irrigation the paddock above looked like the one below. 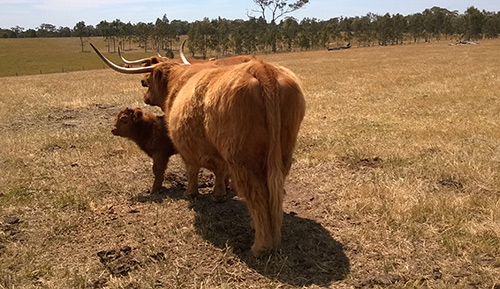 Summer in the Dry Country

Our farm has a mixture of dry country pasture and irrigated pasture (approx. 50/50). The picture of this cow and calf shows how well Highland Cattle can do in poor conditions provided the correct stocking rate is adhered to.

Born and brought up in Scotland I immigrated to Australia over forty years ago. I started breeding Highland Cattle in 1987 initially by means of a "grading up" program using beef shorthorn as a base. A first cross cow with a heifer calf at foot was the initial purchase, which was at that time "a wee bit of nostalgia".

In 1989 the fold rapidly outgrew the "hobby" label with the importation of a delightful young "fullblood" heifer from New Zealand and it was after this we moved away from graded-up stock and concentrated on only “fullblood” animals, all with no grading-up in their pedigrees. This gave us the traceability of all our stock back through the various herd books to the original UK herd book.

We also imported embryos from Canada as well as semen from both America and Canada. Apart from the imported embryos we also ran a number of embryo programs with our own imported female and some of her offspring.

We generally aim to have around 20 breeding age females plus bulls, steers and young heifers ... giving a total between 30 - 40 head. Running "stud" type cattle, in this case Highlands, we can maximise the earning capacity of the property.

Highland Cattle are promoted for their ease of calving, flavoursome beef, their hides as a by-product, and the fact that they will hold their condition for longer than many other breeds in poor country. 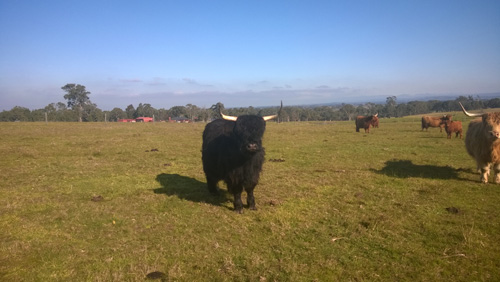 View back towards the farm house

Our dry country has magnificent 270 degree views towards the Great Dividing Range and Strzelecki Ranges.

With adequate rainfall there can be good pasture growth during the cooler seasons. 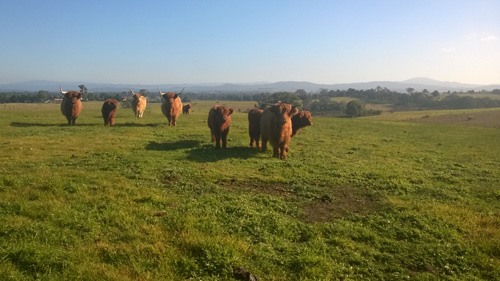 Autumn in the Dry Country

A short introduction to our farm.

The video was taken during summer and the cattle are in their summer coats with their hair length quite short. Highland Cattle grow the long hair for the winter months and cast it off again in the spring. Only a small portion of our herd feature in the video. Our solar panel arrays help provide power for our irrigation system.