Note copyright notice at the end of this article.
(Pictures added by Cruachan Highland Cattle)

No one knows the exact origins of Scotland's distinctive shaggy haired breed of Highland Cattle. Are these extraordinary beasts related to a domesticated strain of cattle that were brought to northern Britain in Neolithic times? Are they, perhaps, the direct descendants of the now extinct auroch or European wild ox? There is, after all, more than just a hint of the mammoth in the appearance of a fully grown Highland cow.

Highland cattle have certainly retained some primitive traits absent from other domesticated breeds. The bulls keep a close watch over their herds, guiding them carefully through danger: across rain swollen rivers, or over marshy ground. The cows, normally placid, have a strong maternal instinct and become fiercely protective of their new born calves. Often a mother will take her calf away and hide it until it is able to run freely, returning once or twice a day to suckle it.

Whatever their origin, West Highland cattle, or kyloes as they were originally known, have changed little over the past 300 years. They are somewhat larger, but the significant difference lies in the colour of the coat. The earliest accounts of West Highland cattle always refer to them as "the black cattle". There were doubtless a minority of brown, red, dun and brindled animals among them, paler beasts that were gradually to become the more popular. But one Dumfriesshire breeder has ensured the continuation of the black strain, and his cattle are probably very similar to the original black kyloes. They often reward him with unexpected dividends when they are enrolled as extras in films and television series.

There have been many famous folds of Highlanders. The MacNeils of Barra and the MacDonalds of Uist reputedly had large long established herds of pure West Highlanders. But while none of the folds mentioned in the old herd books has survived, their blood lines have. Distinguished ancestries are echoed in the names of today's stock bulls: Jock the 26th of Leys, Hamish of Cladich, or the tongue twisting Proiseag Ruadh the 24th of Achnacloich.

In the early 19th century there were about 150,000 West Highlanders in the Hebrides (as well as substantial numbers in the Highlands, Caithness, and the northern isles of Shetland and Orkney). Each year about 30,000 of them — many accompanied by their calves — made the long trek from the islands to the mainland markets at Crieff, Falkirk and sometimes as far as the north of England. If they left in August or September they'd hope to get there before the weather deteriorated in November.

In the 1980's Drovers took the same historic route to prove modern cattle were just as able to withstand the rigours of the journey as their ancestors. 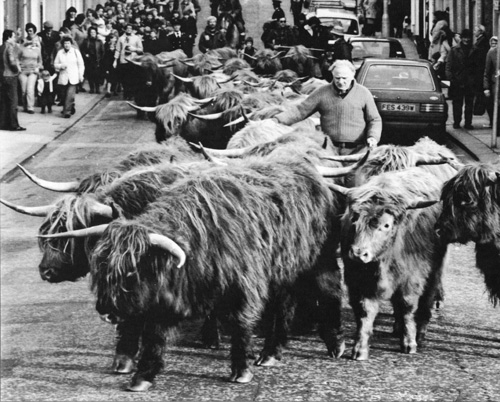 The photo shows the cattle arriving in Crieff after a 180 mile journey from the Isle of Skye.

Angus Mckay, a former President of The Highland Cattle Society (Britain) and himself a breeder of champion West Highlanders, is fascinated by the breed's history. "They used to say the ones with short legs travelled better than the ones with long legs. The distances they had to cover were amazing. The drovers might ferry the herds from Lewis or Harris then walk the cattle through Skye before swimming them across to the mainland. Considering the tides, that must have been a pretty tricky business." This explains the origin of the name kyloe: it comes from caol, the Gaelic word for kyle or narrow channel of sea.

The black cattle were also valued because they could withstand the severest conditions: winter feed was scarce in the poor crofting lands of the Highlands. Today's pure-bred Highland cattle still survive in weather that no other domesticated breed can tolerate. Their thick, double layered coats form effective barriers against the elements: the outer layers are long and strong to withstand rain; soft undercoats protect against the cold.

The long fringe of hair known as the "dossan" shields the eyes against snow and driving rain, and helps prevent eye infections spread by insects. With such long coats and enormous, tapered horns (which point upwards on the cows and downwards on the bulls) these cattle have a magnificent, even fearsome, look about them. In fact, they are remarkably even tempered beasts.

Highland cattle have become hugely popular in recent years: about 130 new members join the Highland Cattle Society (Britain) each year. Highlanders are found on the gentle slopes of the Sussex Downs as well as the windswept moors of the Highlands. The growing demand is reflected in the prices that good animals now command: 20 years ago a pair of pure-bred Highland cattle could be bought for £500 : nowadays they might cost £12,000. They are also proving popular abroad. Sweden, Denmark, West Germany, Holland, Canada, America and Australia are among the countries that have successfully imported the breed. They are even to be found foraging 10,000 feet up in the Andes.

People who normally wouldn't look twice at a cow often find the Highlander's wild, untamed appearance quite irresistible. Fine specimens are guaranteed lives of luxury in lush pastures of country mansions — on the strength of looks alone. But while it may be ironical that such animals, custom made to survive the rigours of northern winters, should end up as exotic attractions in parks, Highlanders still prove their worth in practical ways. A free roving herd on the island of Rhum survives only on what is available on the island: at market they are considered the equals of any farmed Highland cattle. Highlanders have been introduced in the Austrian Alps, where increasing number of small farmers had abandoned their farming and farm buildings to the needs of the tourism and the un-grazed slopes became like mud slides in the spring thaws. The Highland cattle, able to survive outside at these altitudes, now keep the mountain pasture land grazed and intact.

The cattle were first exported to the United States in the 1860s. Now one enterprising American has found a way of curing the hides that successfully preserves their rich colour and soft hair.

Highland cattle were introduced to nature reserves in Holland almost seven years ago and they now thrive in a semi wild state among the heather, birch woods and rough grassland of their adopted home.

Angus Mackay believes in a bright future for the breed. "Most people still buy Highlanders for their looks, but more and more are considering putting them into low input agricultural systems because they don't require huge buildings, or expensive concentrated feeding. And the interest in organic beef production could be of great significance," he adds. "If you leave a Highland bullock to mature until he's two and a half years old he requires very little extra feeding, and at the end you've got a natural product."

Some years ago at a blind tasting of beef from various breeds, many people were surprised when Highland beef was judged the winner. Its marbled leanness is explained by the fact that, like red deer, Highland cattle don't lay down layers of subcutaneous fat. They store it instead around their kidneys.

All this is good news for a breed once considered too old fashioned to have a place in modern farming frequently written off as being at best ornamental and at worst a mere curiosity. But its unique qualities have never been lost in attempts to breed a more marketable animal and its original characteristics are still sought at sales and shows now: an extensive coat of hair, sturdy legs and a long, well proportioned body. Today's prize animals must still be able to survive adversity, just as their ancestors, the black cattle, did on the bleak windswept hills of the Western Isles.

The above article is copyright © 2000 Alan Edwards, and may not be reproduced in any form without his prior written permission. All rights reserved.