Note copyright notice at the end of this article.

This article came about through e-mail correspondence
between the author and Cruachan Highland Cattle.

We thought it worthy of inclusion in our “Feature Articles”.
(Photos were added by Cruachan Highland Cattle) 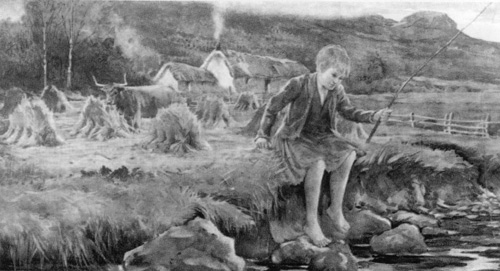 'In the early 1950's, when I was maybe five or six, our family used to go to visit my great aunts on a croft in the Braes, 6 miles from Portree. When I went there I believe my oldest great great aunt was 93, so she would have been born around 1860... and therefore in her twenties when the Napier Commission put an end to the Highland Clearances.

Anyway, she seemed quite sprightly to me, though her English was fairly haphazard, but I was still able to exchange a word or two... more importantly, for a six year old, the house was surrounded by cattle, with alarming horns, which were quite a surprise to me. Two of them were hers, it seemed, though there were more, and no sign of any fences, and as I remember it, eight or nine of them used to hang around about the place most of the day and then wander off... maybe to be milked in their own homes?... and then come back for a bit of a chat.

Our family croft was obviously their local caff, or social club, if you were a cow. It took me a while to get over my alarm, which is probably why I remember it, not least because they were so damn friendly! One of them in particular took to wandering about with me and was so tame I slowly began to overcome my fear, and city boy horror at the state of her coat, and realised this was more of a rather lonely and gregarious dog than a savage beast about to eat me. 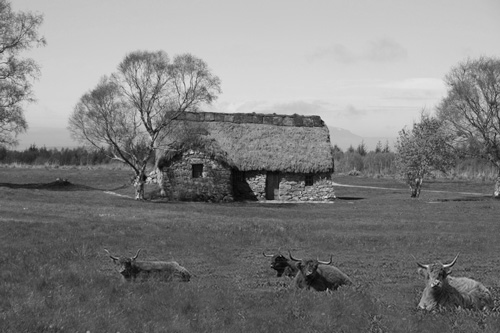 What I also remember is how small and black/grey they were, with a kind of muddy Rastafarian look on the hair front - my fairly tiny aunt was taller. They were obviously desperate to do whatever pleased her, though they spent a long time looking stupid and staring while they slowly, but affectionately, wondered what on earth she had in mind. They were more like very large slow goats, or maybe incontinent poodles, than cattle. She also showed me where they used to come indoors, if the mood took them, where there was now a kitchen - 'since the electricity' and apparently that used to warm her bedroom above so effectively that it was often so hot she had to leave all the windows and doors open in winter... 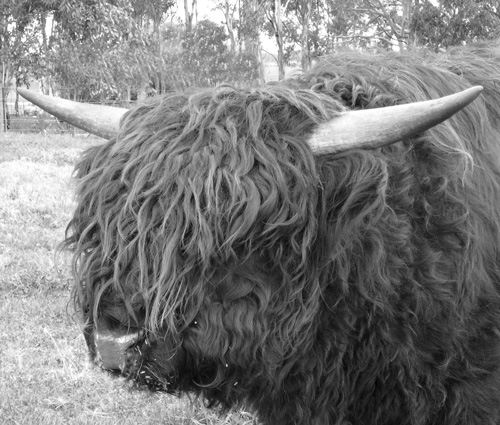 My aunts' father used to bleed his cattle in winter to make blood sausages, which apparently didn't bother them, but my aunt didn't like that much, and didn't do it. I suspect she was too fond of 'em.

The scones and potato cakes and butter she made with their milk were unforgettable. One buttered scone and even a five year old had to go and lie down.

When I returned to the Highlands, many years later, you can imagine how I began to doubt my sanity when a glorious blow-dried golden creature, three times the size of those I remembered, was pointed out to me as a Highland cow. It looked to me like any old cow. Nice enough, but fairly dull. No spark of intelligence or curiousity in the eyes. No one in the car believed me when I told them that wasn't a proper Highland cow - and, of course, I have since learnt they were right.

As you know it is my ambition, in the middle of France, to help keep the crofters domestic variety alive - who knows when they may be needed again?’

Author’s name withheld. However, the above article is copyright © 2004 of the original author, and may not be reproduced in any form without his prior written permission. All rights reserved. Please contact this site if you require further information